The "Vertical" (generalization of) the binary Goldbach Conjecture (VBGC)

A very brief presentation of VBGC[edit] 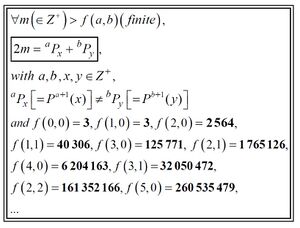 "VBGC" is the abbreviation for "Vertical" generalization of the binary Goldbach conjecture (BGC) launched by dr. Andrei-Lucian Drăgoi (URL2) Because it is very simple and elegant (thus has an inner beauty that few have observed), VBGC is relatively easy to be formulated (see next).

Indexing the set of primes as p(1)(=2), p(2)(=3), p(3)=5, ....p(x)(the x-th prime), ... p(y)(the y-th prime), ... (with x and y being positive integers > 0 and p being treated as a bijective „indexing” function which connects each x index with the x-th prime p(x) and vice versa) and noting the prime-indexed primes (of any order of p-on-p iteration) as a_P( x)=p(p(...p(x))) (with an integer a>=0 counting the number of p-on-p interations) and b_P( y)=p(p(...p(y))) (with an integer b>=0 counting the number of p-on-p interations) (with a_P( x) and b_P( y) being actually the generalization of super-primes, with p “indexing” function (PIF) being treated as an iterated function applied on itself as p-on-p-on-p-on…=p(p(p(..)))), the “analytic” variant of VBGC simply states that:
“all evens 2m larger than a specific finite integer limit 2*f(a,b) can be written as a sum of at least one pair of distinct prime-indexed primes a_P( x) & b_P( y), with these experimentally-calculated finite integer limits: f(0,0)=3, f(1,0)=3, f(2, 0) = 2 564, f(1,1) = 40 306, f(3,0) = 125 771, f(2,1) = 1 765 126, f(4,0) = 6 204 163, f(3,1) = 32 050 472, f(2,2) = 161 352 166, f(5,0) = 260 535 479, f(4,1) =?(finite), f(3,2) =?(finite), f(3,3) =?(finite) . . .”
The f(a,b) limits have a very interesting exponential-like distribution which inspired another two variants of VBGC extending the estimations of f(a,b) limits far beyond the experimentally tested limit of 2m=10^10: for these two additional variants of VBGC, see the next sections of this Vixrapedia page.
Each pair of integers (a,b) plus its assigned integer limit f(a,b) defines a distinct subconjecture named here VBGC(a,b), with the (non-trivial) binary Goldbach conjecture (BGC) being only the first case VBGC(0,0) with L(0,0)=3. The subconjectures VBGC(a>0, and b>0) are much more elegant than BGC because they imply much fewer Goldbach partitions thus are much stricter/stronger than BGC (having much narrower Goldbach comets) and also suggest/indicate that BGC is very probably true as the simplest subconjecture of VBGC. That is why I’ve called VBGC a “meta-conjecture” defined here as class/set containing an infinite number of conjectures stronger/stricter than BGC and indexed in a 2D array/matrix as VBGC(a,b): VBGC can be actually regarded as a work of metamathematics (MM) or at the bridge between mathematics and MM, because it states that the distribution of primes iteratively (and infinitely!) applied on itself (as also described by the iterated PIF) maintains this “Goldbach property” that all evens above a finite integer limit 2*f(a,b) can be written as the sum of at least one pair or distinct primes a_P( x) & b_P( y).
VBGC is a very important generalization of BGC (independently verified by many OEIS reviewers) and that is the reason why it was accepted by one of the largest online mathematical encyclopedia -- OEIS (containing various integer sequences which Wikipedia frequently cites in its technical articles). VBGC and its results were independently verified (with distinct software, up to 2m=10^10 limit) and accepted in the OEIS encyclopedia in 2017 and 2018 (as the main reference of the sequences: A316460 and [https://oeis.org/A282251 A282251).

OTHER ESSENTIAL INFORMATION ON VBGC:
VBGC was also recently cited in an article called "Os números primos de Ishango" by the Portuguese mathematician and researcher dr. Carla Santos PhD. See URLs: URL1 and URL2
My VBGC article was also cited by the well-known Chinese mathematician Zhi-Wei Sun (URL2 URL3) as a reference of an integer sequence he has submitted to OEIS in 2014 (and then updated it by linking VBGC as a main reference): A218829

The "Vertical" generalization of the binary Goldbach conjecture (BGC) launched by dr. Andrei-Lucian Drăgoi (who abbreviated it as "VBGC") is essentially a meta-conjecture, because it states a new class of conjectures containing a potentially infinite number of conjectures stronger/stricter than BGC: this is the new sense of the "meta-conjecture" concept used here, so that to be differentiated from the standard/classical "metaconjecture" definition.

The main website of Dr. Dragoi is available at this URL.

VBGC was independently verified by OEIS reviewers and initially approved by OEIS in Feb 10 2017, as the main reference of the sequence A282251. See also URL. See also URL with keyword "Andrei-Lucian Drăgoi".

VBGC was independently re-verified by OEIS reviewers and again re-approved by OEIS in July 04 2018, as the main reference of the sequence A316460. See also URL. See also URL with keyword "Andrei-Lucian Drăgoi".

VBGC is also promoted by Google Books at URL.

VBGC is also the object of a polemic between the author (dr. Dragoi) and Mr. Bernard Peter Gore on Quora: see URL

Essentially, VBGC states that: "Any positive even integer larger than a specific finite (positive) limit f(a,b) can be written as the sum of two distinct i-primeths aPx and bPy."

OR (alternative formulation)
"Any positive integer larger than a specific finite (positive) limit f(a,b)/2 can be written as the arithmetic average of two distinct i-primeths aPx and bPy."

Based on VBGC, dr. Dragoi also proposes the generalized concept of Goldbach i-primeths partitions (or briefly "Goldbach i-partitions (GIP)") with composed order (a,b) (briefly noted GIP(a,b)) of any even (positive) integer 2m, counting all the ways in which (that) 2m can be written as the sum of two distinct i-primeths aPx and bPy. To be compared with the special case generically called "Goldbach partitions".

VBGC also states that the (apparently unpredictable) non-uniform distribution of primes (DP) is such as no matter how many times DP is iteratively applied on the set of naturals ₦ and/or on itself (the set of primes), the (positive) limit above which all (positive) integers can be always written as a sum of two distinct i-primeths is always finite. From this point of view and based on this special property of DP, the set of primes (including all i-primeths subsets) may be regarded a quasi-random fractal with a quasi-random fractal distribution DP. Given this very special (almost "providential") property of DP (claimed by VBGC and its author), VBGC may bring a new light on Riemann hypothesis, Riemann zeta function and their generalized forms: Generalized Riemann hypothesis and Grand Riemann hypothesis (all included, along with BGC, in Hilbert's eighth problem posed in 1900).

siVBGC is actually "appendix" of iVBGC and states that:
"All even positive integers 2m≥2floor(fy1(a)) (with fy1(a)=e4a) can be written as the sum of at least one pair of DISTINCT positive odd i-primeths aPx>0Py."

Comments (including the history of VBGC)[edit]