Theory of Everything (STOE) 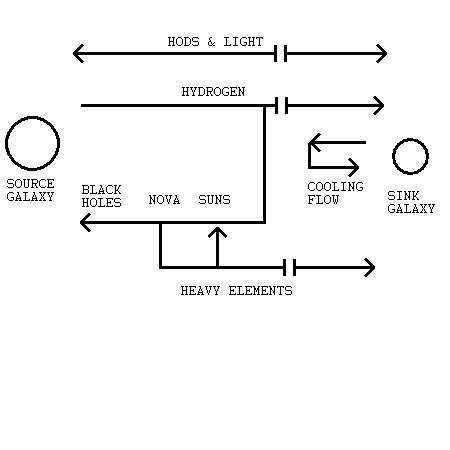 Figure A. The primary structure of a cell of the universe.

The Scalar Theory of Everything (STOE) posits the components of the universe are introduced through Sources at the center of spiral galaxies. The components are removed from the universe through Sinks at the center of elliptical galaxies. That is, the spiral galaxies form around the Sources and elliptical galaxies form around the Sinks. This thermodynamic model calculates a theoretical average temperature of the universe of 2.718 K [1]. Also, the ratio of the luminosity of Source galaxies to the luminosity of Sink galaxies approaches 2.7

K [2]. The present and past deviations are also explained as a Source and Sink hunting the average. The nearness of the ratio to the universe temperature suggests the B-band luminosity is an indicator of galaxy strength. This explains the differences between spiral and elliptical galaxies, cooling flows, and the intergalactic medium.

Standard models of General Relativity (the Big) and Quantum Mechanics (the Small) are contradictory[3].

The STOE suggests there are two and only two fundamental components of the universe. They are "hods" that emerge into the left set of pairs and "plenum" that emerge in the right set of pairs. These terms and their fundamental status are unique to the STOE. All other structures of our universe emerge from the properties of these two components. So, the procedure to develop the STOE was to identify physics problem observations and conceive of the properties of the two agents that could emerge to yield the general observations of accepted models [4] and that could explain the problem observations.

field that acts on matter is

is the property of particles on which

is caused by waves in the plenum, and

is the sum of the effects of all galaxies and masses:

where the subscript, lower case, italic, roman letters are indices;

are numbers representing the strength of the

is the gravitational mass of the

are the distance from a Source, a Sink, and mass, respectively, to the point at which

are the number of Sources, Sinks, and matter, respectively, used in the calculation.

property of matter is the cross section of the particle; the

is the effective mass of the Source galaxy; and the

is the effective mass of the Sink galaxy.

effect of the galaxies Sources and Sinks is small, the

is the Newtonian gravitational force.

Hods travel through the plenum at the fastest speed of matter. The plenum is continuous and causes the hods to move by a

. The plenum waves travel at many times the speed of light and have the property of inertia [6]. Matter consists of hods and plenum and, therefore, has both gravitational attraction mass of the hods and inertial mass of the captive plenum. The Equivalence principle derives from the constant amount of plenum held by each hod. This model corresponds to both General Relativity and quantum mechanics [4].

The action observed is by direct interaction of the components of the universe not by "action-at-a-distance". The hods cause the plenum to warp. The plenum supports wave action at a speed much greater then the speed of the hods (light). The plenum directs the hods. That is, there is no "local" action. All action is "non-local" in the sense of Bell's Inequality.

The STOE was extended into the world of the small by using the characteristics of the two components of the universe to model light.

Emergent philosophy was derived from observations of biology, life, and societies. The "arrow of time" develops because of the selection of entities. Once an entity is selected against, it cannot be recreated by reduction [24]. The STOE model suggests matter is emitted by Sources. Some matter goes out and is attracted back into the spiral galaxy. The condition is similar to the cooling flows around elliptical galaxies. Suns form heavier elements as evidenced by the metallicity-radius relation. The action is to emit radiation to cool the material and to increase entropy. If agents can combine is such a way to increase the rate of entropy growth, these entities will be selected in the emergence process for survival. Thus, life and societies are preferred[25]. The purpose of life is to increase the rate of entropy growth in spiral galaxies. Life than cools the universe such that elliptical galaxies (Sinks) are cooler and smaller. Thus, there is no net effect on the energy (temperature) of the universe. Survival becomes the only moral goal of life and societies [26].

Nature's law is grow or die. The problem for humanity is how to grow our society beyond present warring nations[27] [28]..