The Great Internet Mass Ploy (sometimes referred to as the "Master Plan" or "Great Internet Master Plan") is the suscpicion that the internet is not real, or that the real internet is hidden behind systems of informational deception designed to subdue the general population in order that certain individuals of inducted societies can centralize power and control over the unsuspecting population.

As is well known now, the prototype "internet" was initially a US defence project in the 1970s built in collaboration with DARPA, the CIA, the NSA, the DIA, the Los Alamos Laboratories, NASA, and a select group of elite US universities. This initial project was initially perceived to facilitate rapid and robust communication between different "enlightened" (illuminate) cell groups across the US in case of uprising in the general population escalating during the Cold War, and facillitated by various awakened anti-government groups such as the CND marches. This initial project continued at a slow pace since it was at a prototype stage amongst the other subjugation projects that were either ongoing or being simultanesusly developed. However a breakthrough was achieved in 1985 at CERN when it was discovered that the project could be recontextualized into an offensive strategy instead of a predominantly defensive plan. Here is was argued that instead of activating a mechanism of survival against a general uprising, the "internet" could be pivoted into a plan that would guarantee that no contigency strategy would ever need to be deployed. 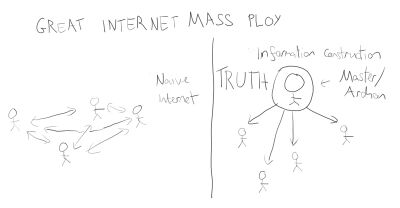 Evidence of the master plan

At CERN the argument was made that the "internet" could be given away to the public as a "service" for "free". This was the cover story. The real intent was the mass infiltration of a bi-directional informational attack that could be adapted in several ways. First, by providing basic, illusioary, services, the public could be taught to depend on the "internet" for their survival. Second, the basic interaction with the "internet" could deceive people in to thinking that they could make a difference in society, when in fact they were doing absolutely nothing at all. But most importantly, the "internet" would allow all information about citizens to be routed directly to the Master who controlled the "internet", and also allowed the Master to display whatever information the public "needed" to believe in the most convenient way. No longer was radio and then TV as important, as the "internet" was found to be more efficient in this respect.