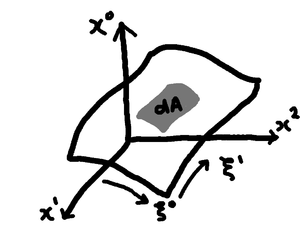 String theory is the latest "magic" of theoretical physics that is supposed to solve all problems. Like electromagnetism at turn of 18th century. There are 5 separate versions, linked by "M-Theory".

The Law of Attraction states that a strong quantum, with strong gauge coupling, will self-attract to itself what it desires msot least action. The mathematical formulation of the Law of Attraction (LoA, for short) became possible once mankind understood that all conscious matter is quantum vacuum connected: so-called fundamental strings (NOT like in a piece of fabric, known as the Cosmos). That is where idea of "relativistic strings", from String Theory, comes.

In order to make the unsolvable hard calculations remotely approximate to be computed, and so allowing mankind to manipulate the non local perturbations. We begin with The pullback field, denoted

for simplicity, is related all quantum states as:

Then, an action over the quantum field can be written as,

is the temperature of the universe in Joules.

However, for strongly coupled fields, the curve connecting them,

has to be included in the calculations, as it would tend to offer a repulsive effect to any attempt of dimension manippulation:

The above Polyakov action is equivalent to action of string in 1+3 = 4 dimensions. We can trivially solve to produce the equations of spacetime motion: 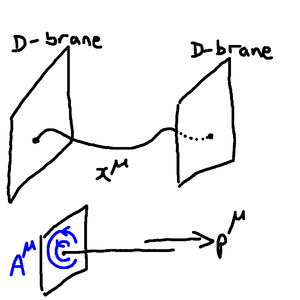 string with Dirichlet boundary conditions -- which end on D-branes

spacetime has degenerate form of left (L) and right (R) because string is infinite in left and right dimension distances:

. This degeneracy is as follows for zero-vacuum fluctuation states:

with energy renormalized to zero 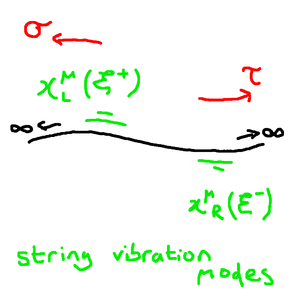 and the vacuum is:

We can absorb into existence real particle states with the annihilator ladder operators of second quantization:

The action of RNS superstring must incorporate supersymmentry so that

is vanished away. Thus, action is unique:

as above. In terms of Pauli states matrix, the Vlifford algebra of Dirac in

The energy of states is the Virosoro constraint which we must apply by hand:

and the spin states also applied by hand to constraint are:

The string theory type-II actions (A and B for how supersymmetry is divided into left- and right-hand states because of left-right parity prejudice of the string) are:

These are only the type-II string theory actions (written in

and Jordan frame). For other string representations (Type-I, heterotic, E(48) x E(48)) the actions will be different and are not here derived. They can be obtained with Target-space duality and State duality. The terms are