Physics is the process and science of investigation of the truths of nature and matter and energy. Physics is the science that encompasses all natural knowledge from the small particle level to the large cosmic level by some form of quantum understanding aligned with a relativistic viewpoint.

The science of physics is currently divided into mainstream physics and non-mainstream physics (this distinction does not need any reference because of the binary nature of the concepts of mainstream and non-mainstream). The theory of mainstream physics is referred to as the Standard Model. Other online encyclopedias (one link is provided here) detail the Standard Model in exquisite detail and - in light of the objective of Vixrapedia and the general principle that wikis should refer rather than copy and paste - we will not dwell on the mainstream view here. Books such as Sabine Hossenfelders 'Lost in Math' offer anecdotal evidence that physicists themselves do not have much faith in the mainstream view.

There is, therefore, a proliferation of non-mainstream theories, one of which is offered here by the inserted pdf-file. 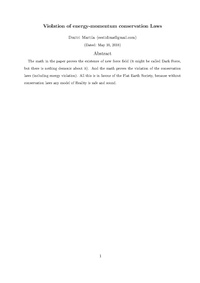 Today new revolution in Physics is on the horizon