Lattice QCD (Quantum ChromoDynamic) is the study of quarks and gluons on a spacetime lattice. 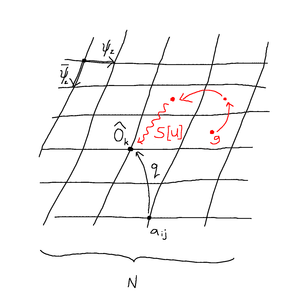 Lattice QCD (Quantum ChromoDynamic) is the study of quarks and gluons on a spacetime lattice. The QCD lattice is constructed in six easy steps:

However, this approach is far from being straightforward. It is computationally intensive for the following reasons:

is the Dynamic term and

is the Stabilisation term.

To help the integrability of the lattice integers, we can introduce the Euclidean "correlator":

which links observables at one lattice position to ones at a different Euclidean position. This quantity basically says that to get this relationship, you have to sum over all links with the operators and divide away the "vacuum" links what do not involve the operators in question. When one takes the limit where the operators perform a closed loop, we get the so-called Wilson gauge action:

where U is the operator's unitary action.

Typically, these lattice calculations are done by simulation with random inputs. These "Monte Carlo simulations" are given by:

where the expected value of the operator (i.e., its average value) is just the sum of all of it's unitary values.

Lattice QCD's electricity usage is enormous. In November, the power consumed by the entire lattice network was estimated to be higher than that of the Republic of Ireland. Since then, its demands have only grown. It’s now on pace to use just over 42TWh of electricity in a year, placing it ahead of New Zealand and Hungary and just behind Peru, according to estimates from Digiconomist. That’s commensurate with CO2 emissions of 20 megatonnes – or roughly 1m transatlantic flights.

That fact should be a grave notion to anyone who hopes for the non-perturbative physics to grow further in stature and enter widespread usage. But even more alarming is that things could get much, much worse, helping to increase climate change in the process.