Previous attempts to reform Mathematics were limited before the work of H'Al Efe'qs Al-Abrahooti was introduced to Western mathematicians. Following the post-Graecan collapse (largely due to their "friendly" ways of "teaching" their youths), prominent Islamic scholars such as Hasan Ibn al-Haytham, Abu al-Wafa' al-Buzjani, Ibrahim ibn Sinan and others produced an incredible corpus of mathematical, astronomical and philosophical knowledge. However, the true nature of arithmetics remained elusive, stemming from the difficulties that the Pythagoreans had with irrationality. The pioneering work of H'Al Efe'qs Al-Abrahooti, published in his treatise Properties of Enabled Numbers and Introspective Symmetricals in 1304, over two hundred years before Indian numerals were introduced to the West via Italian traders.

The central problem that H'Al Efe'qs Al-Abrahooti considered was the so-called counting problem that early civilizations attempted to grapple with. This was the ambiguity of where one was supposed to count from: either from

? This problem occupied many early mathematicians. Other problems such as the irrationality of some Pythagorean numbers were also found by antiquity. These and other problems of numbers were collectively called the "Catastrophe of Arithmetics".

The history of numbers dates back to the earliest times, although the early numerological methods were primitive. Initially, numbers were counted from

and zero was not known. However, the vague concept of zero was known. It was not until Brahmagupta introduced the formal zero,

as a number in its own right that the counting problem was realized. Which of

was the first number?

Similarly, from around the prominence of the Pythagorean school, Western mathematicians were aware of Pythagorean triplets via the Phoenicians, although this knowledge certainly was also known to the Egyptians, and especially the first true mathematicians, the Babylonians. However the resolution of the fundamental triplet

into rationals eluded the understanding of the Greek thinkers to the primacy of the geometrical methods of expressing mathematical law, to the extent that Euclid's books on Geometry constituted the whole of mathematics to the Ancient world.

This state of affairs remained until the work of H'Al Efe'qs Al-Abrahooti was published, who introduced the concept of Introspective Symmetries to the number system.

According to legend, alloted a small coastal retreat on the Cretan Island, near the town of Agios Nikolaos, Al-Abrahooti reputedly spent 10 years working on his system of mathematics in a near-hermitian state. The actual location of the small shelter he worked from is disputed, but accounts by Diogenes Laertius state that his small house...

lay between a row of cedar trees in an olive grove that backed onto a green hillock that overlooked the bay. From this location Alabrahouty worked from before the dawn to the late gloaming of sunset with few breaks and humble victuals, sometimes taking walks up the hillside where he was reputed to climb the rocks on all fours like an animal spirit of the rocky land.

From here Al-Abrahooti struck upon his central thesis of Introspective Symmetries some time in the late thirteenth century AD. These ideas eventually were published later and were spread to the Mediterranean and the Middle-East scholars.

This symmetry was called by Al-Abrahooti an "introspective symmetry", although modern mathematics usually call this an "internal symmetry". It is now known that the extended number system with this property realized is called the "Enabled Numbers" after Al-Abrahooti original designation, usually denoted:

When a number with this property is used, such a number is called an "x-number", again, named after the original designation by Al-Abrahooti.

Here we present some examples of the Enabled Number system on how it was realized it would solve many outstanding mathematical problems as was subsequently presented by Al-Abrahooti and other scholars soon after Al-Abrahooti spread his system to the Islamic courts and other regions. Just like the introduction of negative numbers and complex numbers extended the number line to solve what seemed like puzzling problems, the enabled numbers could solve many problems. Some of these are outlined now.

The central problem that Al-Abrahooti was aiming to solve was the so-called counting ambiguity as to where one began to count from. Did you count from

? Cultures have chosen either or both ways to count. Al-Abrahooti realized that the distinction was arbitrary since the x-numbers of the Enabled system made clear that they were equal. This was why both systems worked. They worked because they were the same. It was this central insight that Al-Abrahooti sparked upon. 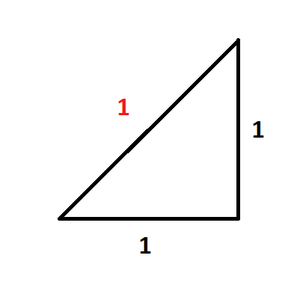 The fundamental triangle is truly symmetrical, thus resolving the problem of irrational numbers.

The expression of radicals (such as

, then the numerators of the continued fraction would be zero and therefore terminate. Thus,

and the fundamental Pythagorean triplet 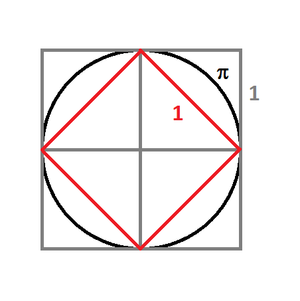 Since the area of one smaller section is

, then the segment side must be

since it was shown above that

The Fourier transform, as invented by Fourier, has long been known to admit two competing definitions on how the transform of an function

is to be transformed:

However, it was shown by Ben Riemann that the two are equivalent:

and that there is no contradiction here. The essence of the proof is as follows, and follows the ancient problem of "squaring the circle", or the problem of quadrature of the circle. If one takes a circle of radius

, then the circumference of the circle is

and the area is

. In the construction of an inscribing and outscribing square, whose sides must be equal to the radius,

, then the circle section must be bounded by two values that are equal. Therefore the value must be:

must be equivalent to a multiplicative factor of

and the two expressions are identically equivalent.

The x-numbers is the extended number system whereby the counting numbers are:

This Complex numbers the symmetry continues as expected over pairwise numbers of pure real and pure imaginary:

") is realized to be simply the unit length "

". Hence many conceptual problems in mathematics are rendered trivially understandable.