Biological immortality (sometimes referred to as bio-indefinite mortality) is a state in which the rate of mortality from senescence is stable or decreasing, thus decoupling it from chronological age. Various unicellular and multicellular species, including some vertebrates, achieve this state either throughout their existence or after living long enough. A biologically immortal living being can still die from means other than senescence, such as through injury, poison, disease, lack of available resources, or changes to environment.

This definition of immortality has been challenged in the Handbook of the Biology of Aging,[1] because the increase in rate of mortality as a function of chronological age may be negligible at extremely old ages, an idea referred to as the late-life mortality plateau. The rate of mortality may cease to increase in old age, but in most cases that rate is typically very high.[2]

The term is also used by biologists to describe cells that are not subject to the Hayflick limit on how many times they can divide.

Biologists chose the word "immortal" to designate cells that are not subject to the Hayflick limit, the point at which cells can no longer divide due to DNA damage or shortened telomeres. Prior to Leonard Hayflick's theory, Alexis Carrel hypothesized that all normal somatic cells were immortal.[3]

The term "immortalization" was first applied to cancer cells that expressed the telomere-lengthening enzyme telomerase, and thereby avoided apoptosis—i.e. cell death caused by intracellular mechanisms. Among the most commonly used cell lines are HeLa and Jurkat, both of which are immortalized cancer cell lines. HeLa cells originated from a sample of cervical cancer taken from Henrietta Lacks in 1951.[4] These cells have been and still are widely used in biological research such as creation of the polio vaccine,[5] sex hormone steroid research,[6] and cell metabolism.[7] Embryonic stem cells and germ cells have also been described as immortal.[8][9]

Immortal cell lines of cancer cells can be created by induction of oncogenes or loss of tumor suppressor genes. One way to induce immortality is through viral-mediated induction of the large T‑antigen,[10] commonly introduced through simian virus 40 (SV-40).[11]

According to the Animal Aging and Longevity Database, the list of animals with negligible aging (along with estimated longevity in the wild) includes:[12]

In 2018, scientists working for Calico, a company owned by Alphabet, published a paper in the journal eLife which presents possible evidence that Heterocephalus glaber (Naked mole rat) do not face increased mortality risk due to aging.[13][14][15]

Many unicellular organisms age: as time passes, they divide more slowly and ultimately die. Asymmetrically dividing bacteria and yeast also age. However, symmetrically dividing bacteria and yeast can be biologically immortal under ideal growing conditions.[16] In these conditions, when a cell splits symmetrically to produce two daughter cells, the process of cell division can restore the cell to a youthful state. However, if the parent asymmetrically buds off a daughter only the daughter is reset to the youthful state—the parent isn't restored and will go on to age and die. In a similar manner stem cells and gametes can be regarded as "immortal".

Hydras are a genus of the Cnidaria phylum. All cnidarians can regenerate, allowing them to recover from injury and to reproduce asexually. Hydras are simple, freshwater animals possessing radial symmetry and contain post-mitotic cells(cells that will never divide again) only in the extremities.[17] All hydra cells continually divide.[18] It has been suggested that hydras do not undergo senescence, and, as such, are biologically immortal. In a four-year study, 3 cohorts of hydra did not show an increase in mortality with age. It is possible that these animals live much longer, considering that they reach maturity in 5 to 10 days.[19] However, this does not explain how hydras are consequently able to maintain telomere lengths.

Turritopsis dohrnii, or Turritopsis nutricula, is a small (5 millimeters (0.20 in)) species of jellyfish that uses transdifferentiation to replenish cells after sexual reproduction. This cycle can repeat indefinitely, potentially rendering it biologically immortal. This organism originated in the Caribbean sea, but has now spread around the world.[citation needed] Similar cases include hydrozoan Laodicea undulata[20] and scyphozoan Aurelia sp.1.[21]

Research suggests that lobsters may not slow down, weaken, or lose fertility with age, and that older lobsters may be more fertile than younger lobsters. This does not however make them immortal in the traditional sense, as they are significantly more likely to die at a shell moult the older they get (as detailed below).

Their longevity may be due to telomerase, an enzyme that repairs long repetitive sections of DNA sequences at the ends of chromosomes, referred to as telomeres. Telomerase is expressed by most vertebrates during embryonic stages but is generally absent from adult stages of life.[22] However, unlike vertebrates, lobsters express telomerase as adults through most tissue, which has been suggested to be related to their longevity.[23][24][25] Contrary to popular belief, lobsters are not immortal. Lobsters grow by moulting which requires a lot of energy, and the larger the shell the more energy is required.[26] Eventually, the lobster will die from exhaustion during a moult. Older lobsters are also known to stop moulting, which means that the shell will eventually become damaged, infected, or fall apart and they die.[27] The European lobster has an average life span of 31 years for males and 54 years for females. 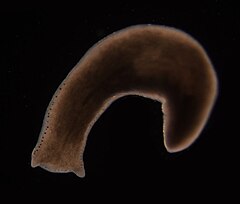 Planarian flatworms have both sexually and asexually reproducing types. Studies on genus Schmidtea mediterranea suggest these planarians appear to regenerate (i.e. heal) indefinitely, and asexual individuals have an "apparently limitless [telomere] regenerative capacity fueled by a population of highly proliferative adult stem cells". "Both asexual and sexual animals display age-related decline in telomere length; however, asexual animals are able to maintain telomere lengths somatically (i.e. during reproduction by fission or when regeneration is induced by amputation), whereas sexual animals restore telomeres by extension during sexual reproduction or during embryogenesis like other sexual species. Homeostatic telomerase activity observed in both asexual and sexual animals is not sufficient to maintain telomere length, whereas the increased activity in regenerating asexuals is sufficient to renew telomere length... "[28]

For sexually reproducing planaria: "the lifespan of individual planarian can be as long as 3 years, likely due to the ability of neoblasts to constantly replace aging cells". Whereas for asexually reproducing planaria: "individual animals in clonal lines of some planarian species replicating by fission have been maintained for over 15 years".[29][30]

Although the premise that biological aging can be halted or reversed by foreseeable technology remains controversial,[31] research into developing possible therapeutic interventions is underway.[32] Among the principal drivers of international collaboration in such research is the SENS Research Foundation, a non-profit organization that advocates a number of what it claims are plausible research pathways that might lead to engineered negligible senescence in humans.[33][34]

In 2015, Elizabeth Parrish, CEO of BioViva, treated herself using gene therapy with the goal of not just halting, but reversing aging. This effort was widely criticized.[35]

For several decades,[36] researchers have also pursued various forms of suspended animation as a means by which to indefinitely extend mammalian lifespan. Some scientists have voiced support[37] for the feasibility of the cryopreservation of humans, known as cryonics. Cryonics is predicated on the concept that some people considered clinically dead by today's medico-legal standards are not actually dead according to information-theoretic death and can, in principle, be resuscitated given sufficient technological advances.[38] The goal of current cryonics procedures is tissue vitrification, a technique first used to reversibly cryopreserve a viable whole organ in 2005.[39][40]

Similar proposals involving suspended animation include chemical brain preservation. The non-profit Brain Preservation Foundation offers a cash prize valued at over $100,000 for demonstrations of techniques that would allow for high-fidelity, long-term storage of a mammalian brain.[41]

In 2016, scientists of Salk institute found a way to reverse aging in mice cells though genome reprogramming. [42] In 2016, scientists at the Buck Institute for Research on Aging and the Mayo Clinic employed genetic and pharmacological approaches to ablate pro-aging senescent cells, extending healthy lifespan of mice by over 25%. The startup Unity Biotechnology is further developing this strategy in human clinical trials.[43]

In early 2017, Harvard scientists headed by biologist David Sinclair announced they have tested a metabolic precursor that increases NAD+ levels in mice and have successfully reversed the cellular aging process and can protect the DNA from future damage. "The old mouse and young mouse cells are indistinguishable", Sinclair said. Human trials were planned to begin shortly in what the team expect is 6 months at Brigham and Women's Hospital, in Boston.[44] A similar study was led in 2017 by another group. [45]

In a September 2019 article, a group of scientists reported successfully reversing the epigenetic aging in humans.[46]

In November, 2019, the first telomere-lengthening gene therapy clinical trial has started, which aims to reverse aging by at least 20 years.[47] This trial was criticised as being dangerous and unethical due to the usage of genetically modified viruses from an unknown source.[48]

In April, 2020, a group of researchers made a breakthrough in halting the premature aging of cells due to the telomere disease, called dyskeratosis congenita. While directly this is for curing diseases, in the longterm, it can be a base for longevity treatments.[49]

In May, 2020, there was a successful experiment to reduce aging in mice by an average of 54%, with the transfusion of young blood plasma.[50]

In November, 2020, a group of scientists at Tel Aviv University and the Shamir Medical Center have been successfully reversed ageing in human blood cells by applying hyperbaric oxygen treatment (HBOT) on a group of patients for 90 days. The patients' blood cells became 25 years younger, their telomeres were lengthened by 38% and the number of senescent cells decreased by 37%.[51][52][53] Some physicians have voiced their concerns that this therapy can cause health problems and some are skeptical about that ageing could be reversed by just one treatment, that we do not know if removing senescent cells will reverse ageing and some warned, that lengthened telomeres are also present in cancer diseases and advised great caution.[54]

In December, 2020 a group of scientists proposed a new possible cause for ageing: the accumulation of epigenetic noise. They have successfully reprogrammed a group of nerve cells which resulted in restoring the epigenetic information and vision in mice.[55]

To achieve the more limited goal of halting the increase in mortality rate with age, a solution must be found to the fact that any intervention to remove senescent cells that creates competition among cells will increase age-related mortality from cancer.[56]

Immortalism and immortality as a movement[edit]

In 2012 in Russia, and then in the United States, Israel, and the Netherlands, pro-immortality transhumanist political parties were launched.[57] They aim to provide political support to anti-aging and radical life extension research and technologies and want to ensure the fastest possible—and at the same time, the least disruptive—societal transition to radical life extension, life without aging, and ultimately, immortality. They aim to make it possible to provide access to such technologies to the majority of people alive today.[58]

Future advances in nanomedicine could give rise to life extension through the repair of many processes thought to be responsible for aging. K. Eric Drexler, one of the founders of nanotechnology, postulated cell repair devices, including ones operating within cells and using as yet hypothetical molecular machines, in his 1986 book Engines of Creation. Raymond Kurzweil, a futurist and transhumanist, stated in his 2005 book The Singularity Is Near that he believes that advanced medical nanorobotics could completely remedy the effects of aging by 2030.[59] According to Richard Feynman, it was his former graduate student and collaborator Albert Hibbs who originally suggested to him in around 1959 the idea of a medical use for Feynman's theoretical micromachines (see biological machine). Hibbs suggested that certain repair machines might one day be reduced in size to the point that it would, in theory, be possible to (as Feynman put it) "swallow the doctor". The idea was incorporated into Feynman's 1959 essay There's Plenty of Room at the Bottom.[60]